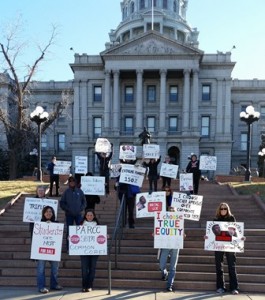 More than thirty protesters gathered in front of the capitol on Monday morning. Our message was simple, since the charterization of neighborhood public schools, students and families, the majority of whom attend neighborhood public schools, have fewer choices. Senator Michael Johnston, who joined Senator Owen Hill as the legislative face at Monday’s Charter School rally, Instituted the PARCC test as the state’s standardized test and then tied teacher’s salaries to test scores in Senate Bill 191. Common Core, PARCC and the high-stakes of performance pay and school labels have actually taken away choice for students and parents in public schools. While neighborhood schools are micro-managed and over regulated, charter schools often get to play by a different set of rules.

Counter protesters to Monday’s “CHOICE” rally included urban, rural and suburban parents from Magnet schools as well as parents so frustrated by the lack of legitimate choice that they are homeschooling their children. While Republicans and Democrats are coming together on Charters, both sides are also coming together to advocate for the right of parents and students to Opt Out of these one-size-fits-all reforms.

The message being sent by National Choice Week is “school choice is working for Colorado families”. That is simply not true for most students. In the last decade the number of children identified as “at-risk” has more than doubled. The poverty rate in Denver Public Schools is at 41%. In the “Race to the Top” college remediation rates have tripled indicating that all of the time spent preparing and testing has left students less prepared for the rigors of college and real world learning.

The charter movement is “working” to generate billions of dollars in private profits. For example, New Profit INC; is focused entirely on “investments” with zero regard for students and learning. Online charter schools are especially lucrative “business deals” because half of the kids drop out before the end of the year, allowing these private companies to retain a whole year of the state’s per pupil revenue (PPOR), despite the fact that most of online students return to public schools or dropping out entirely. Charters have a much higher failure rate. In many cases, like in Denver’s far northeast, they simply close their doors on kids when the profit margins aren’t adequate. 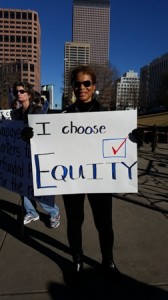 Before charters, Colorado students had the “choice” of art, music and athletic programs. Intervention, prevention and enrichment services that served as critical resources for low-income, English language learners and children with disabilities have either been drastically reduced or entirely eliminated. Students in wealthy zip codes have their neighborhood schools still intact, while low-income areas have been cannibalized by charters or crammed together in neighboring schools that are over-crowded and under-funded. A 2014 national study published by the National Education Policy Center demonstrates that while K-12 online learning is growing exponentially, “full-time virtual schools continue to have serious problems with respect to education quality, diversity, and accountability.” Across all measures of student achievement, virtual schools perform significantly and consistently below traditional schools. Unfortunately our community schools are being starved and simultaneously strangled with the burdens of too much testing and poor quality alternatives.

Even now, in this 21st Century, we continue to be limited by inequality and frankly racism and discrimination. Inequity and segregation have been made worse by charters and efforts to divert public dollars to private interests. Many reports including, “Schools Without Diversity” have shown that the growth of Education Management Organizations and charter schools contribute to re-segregation and racial stratification. Let’s be honest, 95% of the trustees listed as the “Charter supporters” for “National Choice week” are well-off white men. It’s time we take a closer look at the data and research that has come from two decades of over-regulating public schools and under regulating private charters and virtual schools.

The students who are being most impacted haven’t had a voice in the changing education climate and they certainly weren’t given a choice. This past Sunday I met one of those young men while leaving an Aurora parking lot. He was about 12-years-old and read to me from a laminated script and said he was trying to “Earn a trip to Disneyland.” I was expecting to see candy but when he opened his Rubbermaid container he was selling a full supply of cheap candles and tacky picture frames. I asked him how much money he got from a sale. He said, “Half but a larger percentage of that went towards the trip.” This kid had nothing. His pants were too 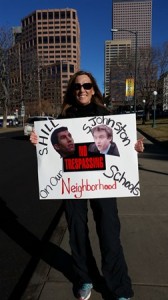 short, his jacket was not nearly warm enough for winter and it appeared like maybe an older sister had administered his hair cut. I wanted to give him something but when I opened my wallet, I only had three dollars in cash. I suggested he save it for something like a snow shovel or window washing supplies so he could build a small business of his own with greater benefits instead of peddling someone else’s crap for an empty promise. I drove away knowing that he was too hungry to be able to save that money and most likely, he was never going to Disneyland.

Angela Engel is a mother of two and has been advocating on behalf of youth and families for over two decades. She is the author of Seeds of Tomorrow and a contributing author to the book, Fixing Public Education. Her work focuses on leadership development, community engagement and organizational impact. Learn more at angelaengel.com

This week in the Legislature:

We need your testimony for these bills on privacy. If you cannot make it, share this with a friend, maybe they can!  🙂  The bills are scheduled as bill #3 and bill #4 On Feb 9th–it is likely that they will be hearing testimony pretty late, if the 2 bills ahead of them have lots of testimony.  Bring a snack.  and I have talked to many parents who are bringing their kids–to let legislators see who it is the data mining is harming.