Angela Engel in the Media

Appearances and articles by Angela Engel:

Here’s to you teachers, for everything you do
-Littleton Independent – June 5, 2018

We discuss the Colorado Student Assessment Program. In public schools across the state, students are spending hours on the tests this month. And the results are hugely important. We hear from Colorado’s commissioner of education, school administrators, teachers, a parent activist and students.

According to the State Department of Education, about 1500 children in the state did not take the Colorado Student Assessment Program test last year. Parent Angela Engel and Republican State Representative Matt Knoedler talk to Ryan Warner about a bill in the state legislature that would stop penalizing schools if students don’t take the test.

Centennial Citizen – November 1, 2010
Vote Yes on 3A
By Angela Engel

Some people say that we’re spending more on education than ever before. That is actually not true. Property taxes today are about 35% lower than they were 15 years ago. 3A has earned bipartisan support and endorsements from the South Metro Denver Chamber of Commerce and the South Board of Realtors. Even businesses recognize the correlation between great public schools and economic prosperity. Many community leaders have promoted 3A because strong neighborhood schools are one of the variables that protect property values. While our property values are important, I’d like to think our children are too. 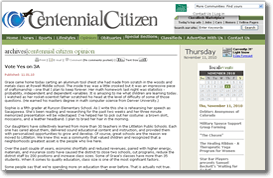 The Denver Post – May 30, 2010
No Child Left Behind and Standardized Tests
By Angela Engel

Parents may want to guard their children as Congress considers the next round of education reforms and the reauthorization of No Child Left Behind. Before we dig ourselves any deeper, let us reflect on the past decade with NCLB and statewide measure to standardize, track, and test Colorado students. 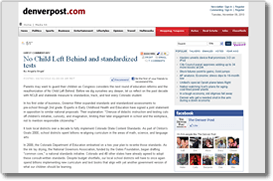 Parents may want to guard their children as Congress considers the next round of education reforms and the reauthorization of No Child Left Behind. Before we dig ourselves any deeper, let us reflect on the past decade with NCLB and statewide measure to standardize, track, and test Colorado students. 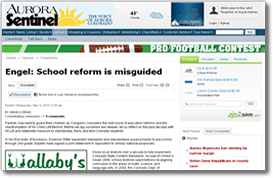 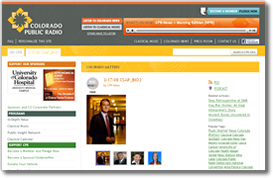 Former teacher Angela Engel is not shy about expressing her views on K-12 education – whether she is preaching to the converted in the school break room or teaching lawmakers a thing or two at the state Capitol. “I sit in these meetings and I hear conversation after conversation about education, and the word ‘child’ is nowhere in those discussions,” said the activist, policy adviser and onetime political candidate. 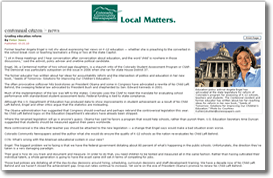 By every measure, Colorado students are worse off
In 2000, Citizens for Quality Public Education published “Senate Bill 186 and The Truth About Colorado Educational Reform,” a report warning about the consequences of grading schools based solely on standardized test scores.

Under the leadership of Gov. Bill Owens, SB 186 was passed anyway. At that time, my daughter, Sophie, was 4 months old. The following year, the federal No Child Left Behind was enacted.

Who is Angela Engel?

•    Author of Seeds of Tomorrow, Solutions for Improving our Children’s Education.
•    Advocate for children, families and the advancement of education for more than 15 years.
•    Extensive experience in the education system as a teacher, school administrator and parent of two school-age children.
•    Solution -based thinker, articulates complex issues in concrete, meaningful ways that connect with the diversity of
stakeholders in the education system. 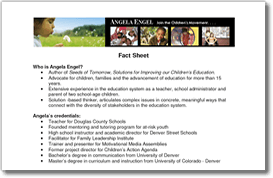